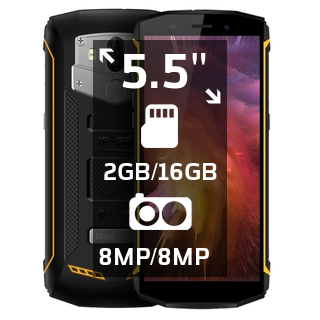 Conclusions: The phone received, the parcel came less than three weeks. No damage, the phone works, the sound is decent. I will not do a full test, because this phone is not myself. Looks like a brick, well, or a hammer, heavy even after bv5000. There is a feeling that you can score them nails or even anchor more seriously. :)
R***s
13/02/2019 12:00
Source: BLACKVIEW Factory Store

Conclusions: I have been using the phone for almost a month. It is fantastic and looks great. Don't hesitate.
S***o
20/12/2018 12:00
Source: BLACKVIEW Official Store

Conclusions: Excellent phone of the best in quality price will see how it behaves in the day to day
A***N
02/12/2018 12:00
Source: BLACKVIEW Speciality Store

Conclusions: Shipping Tver area-2 weeks. Now my bv6000. The bv5800 display not sunk like bv6000, So if you fall on screen, more likely to break it. Safety glasses sit of ugly, they are not in shape and bulge, for bv6000-and beautifully made and display Recessed-So even pasted glass sticks. Camera as the bv6000, general difference is not there. For camera it not take the photo from сиами 5A and is better. Cameras by the way is recessed inland.
C***l
16/11/2018 12:00
Source: Treephone Store

Conclusions: Good machine for your money. Communication, sound, screen and everything else on 4 +. Take for construction (dust, mud, sand, drop, scratch), while the protection work.
S***r
18/10/2018 12:00
Source: BLACKVIEW Direct Store

Advantages: Indestructible!! Telephone resistant, works well, aesthetically pleasing.The bad things are: The weight! It's like keeping an M9 in your pocket! The glass to protect the camera is very delicate.The battery could last longer!
C***n
28/09/2018 12:00
Source: BLACKVIEW Official Store

Conclusions: Everything is fine, 22 Aug ordered 8 Sept received the order was two parcels both tracks. Phone BV5800pro WITH beginning seemed not working безпров. charge but it turned out that just need longer hold phone over it. fast charging phone charging for 2 with половининой hours, wireless for 5 kopecks hours to 100% only the беспров charge phone more warmed. time of your phone a half day (3G, WiFi, YouTube, one SIM card, memory card 32 gig, vayber). ordinary battery, Or rather common duration phone on it. проитивоударность not tested and water resistance also needs no but if suddenly happen then and see. heavy unit itself. scanner print works fine. NFC is also great. flash has a camera, too, in the vicinity of макросемка smart, documents photographs perfectly. charge wireless sew on блеквью but works. Generally satisfied only expect greater автономности.
y***y
12/09/2018 12:00
Source: Twinbuys Official Store

Conclusions: That was a couple of months use распишу more pros and cons. A Battery is good to black вью than a phone from me couldn't survive a day, this even two days passed. + NFC works perfectly + Water and dust holding as a statement on the proper I and bought it, for my dusty work fits perfectly, already and understood and dry tile glue falling in bucket swimming, no scratches or намоканий. Only when побывает IN WATER minutes 30 sleeping speaker, but then as if nothing had happened. + Screen is quite bright, quality, normal response to the sensor + Performance description do not expect сверхскорости, still 2 gig of it quite a bit for 2018 years. Now move on to the -Thoughtfulness when running multiple applications/tasks. -Camera. Anything from Sony there and no smell. Deshovenky nouneym, poor quality. -Sensor fingerprint often lag and does not recognize my finger so that the old graphic key.
P***n
02/09/2018 12:00
Source: BLACKVIEW Factory Store

Conclusions: The phone is good. All, as in the description. Seller answer questions immediately. Although almost sends the phone from China to Singapore, and parcel arrived for 17 days. But it is stated in the description of the goods, delivery within 60 days, so that everything is OK. Seller recommend
AliExpress Shopper
21/08/2018 12:00
Source: Xphone Store